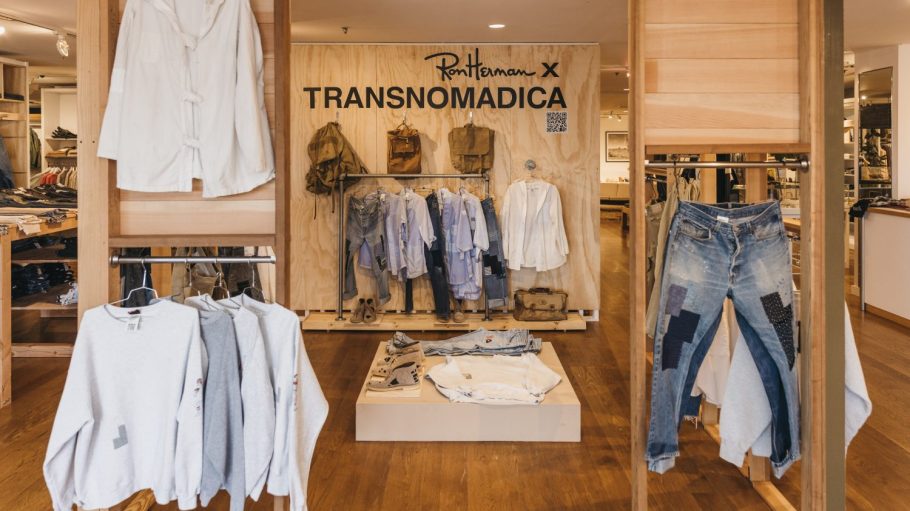 The vintage Levi’s 501 jeans selling at luxury retailer Ron Herman have a story.

They were found stashed away in a box in someone’s garage where the denim pants had been for who knows how long. A phone call was made to Maurizio Donadi, a longtime Los Angeles vintage apparel collector.

As a former Levi Strauss & Co. executive, he knew the blue jeans were made by the San Francisco manufacturer in the late ’70s and early ’80s, determined by the Levi’s logo on the label and the Made in USA tag. The patches on the jeans of rainbows and peace signs confirmed that.

He bought those Levi’s, which are now part of a capsule collection made under Donadi’s Transnomadica label that takes vintage clothes and refashions them into upscaled pieces. The special collection recently launched at the Ron Herman store on Melrose Avenue in West Hollywood.

What makes the collection even more unique is the QR code hangtag dangling from each garment. Take your phone, click on the code and up pops the history of the vintage garment, what it is made of and care instructions to make the piece last longer.

“A QR code is not a novelty thing, but it is quite revolutionary to put a QR code with an individual item that is a vintage and upcycled product in a limited edition,” said Donadi, whose Transnomadica label is housed in a two-story building in industrial Vernon, California, where he stores 15,000 vintage clothing pieces. 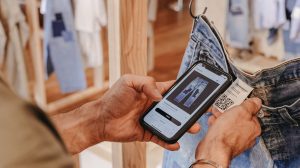 Donadi enlisted Avery Dennison, the well-known label and functional materials company, to come up with a QR code hangtag for his garments, which required writing information about each piece. Avery Dennison believes the partnership underscores its commitment to a circular apparel supply chain and supports its 2030 sustainability goals.

“We’re advocates for reusing what already exists, and Transnomadica and Ron Herman are demonstrating just how desirable upscale vintage can be,” said Michael Colarossi, vice president, product line management, innovation and sustainability, RBIS, at Avery Dennison. “This collaboration adds a layer of technology so shoppers can connect with what they buy at a deeper, more emotional level.”

That’s when he thought of asking Avery Dennison to help record this valuable information.

The Transnomadica men’s pieces in the store-within-a store at Ron Herman are in good condition but have a one-of-a-kind arty vibe about them. The blue jeans have patches of Japanese fabric hand-sewn on the front. The men’s shirts were imperfect when found with stains and cigarette holes, but were cut out. What was left was a shirt frame to be filled in with fabric, pocket patches on the sleeves, and a wide silhouette that gives the top a short kimono look. Repurposed khaki pants were shortened to calf length. Small pockets and artisanal piping were added on the side.

Ron Herman, which has been selling men’s and women’s clothing from emerging and high-end designers since 1976, has always been a place where shoppers can find unique concepts.

A partnership with Donadi to sell this vintage capsule collection seemed a natural. “I have always been a fan of whatever Maurizio has done over the years,” said Ruben Leal, the men’s buying director at the store where the ethos has always been a blend of selling fine clothing with a meaningful shopping experience.

In March, Ron Herman introduced a Donadi-designed capsule collection of vintage-inspired T-shirts, jackets and khaki pants manufactured by Dockers. The Transnomadica vintage collection with its QR code hangtags seemed a natural next step.